This Node-RED flow is for absolute beginners with minimal Javascript programming knowledge, who plan to participate in Hackathons. 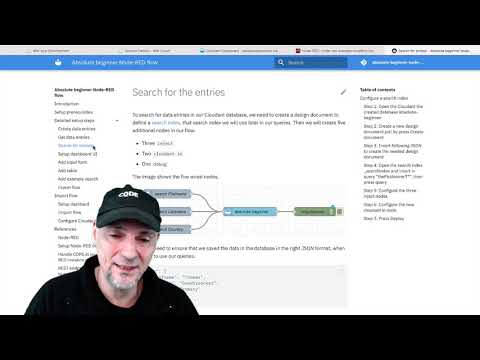 The documentation guides you to following main topics in Node-RED:

The flowing gif shows the usage of final flow implementation in Node-RED.

The motivation for that example project is: When I support Hackathons I notice there's often a lack of programming knowledge and building UIs. If this is the case, then Node-RED is a perfect starting point to realize a prototype at a hackathon. The dashboard of Node-RED is an awesome way to build a UI, but there was a "out of the box" Node missing to simply to add a table. Now I found a very useful Node that’s create a table inside a Node-RED dashboard.

That’s motivated me to create this example project, which provides an example to build a simple application from scratch, which contains the main functionalities to insert data, display data in a table and search for values, as you see in the gif below.

The following diagram shows the simplified architecture of the example Node-RED application.